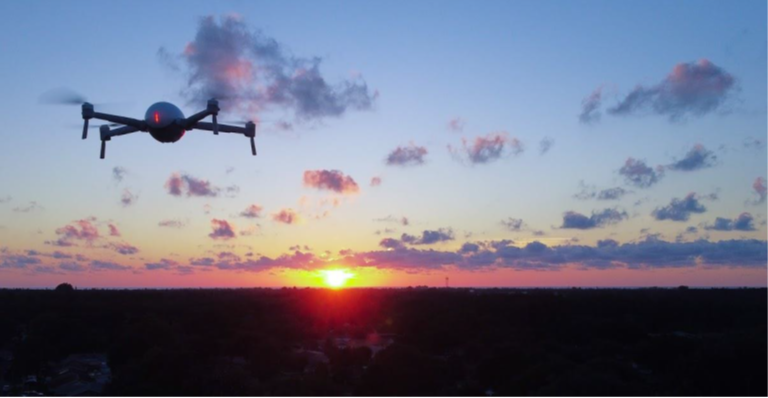 Figure 1: Sunset over the Gulf of Mexico documented by a Power Egg X unmanned aerial system

Recently I’ve been using drones to monitor the atmosphere. We even have a waterproof drone that is capable of flying in the rain and other extreme conditions. The Power Egg X can fly in up to 22 knots of wind as well.

Practicing with these types of drones has proved very valuable for our academic research as well. These devices are incredible for collecting observations and documenting landscapes and the different atmospheric conditions. Every evening I photograph the sunset over the Gulf of Mexico from about 300 feet above ground level, and have now captured some great pictures. Soon it will be hurricane season in Florida and the sunset will look much different. These pictures were taken with the Power Egg X from my house looking west into the Gulf of Mexico. 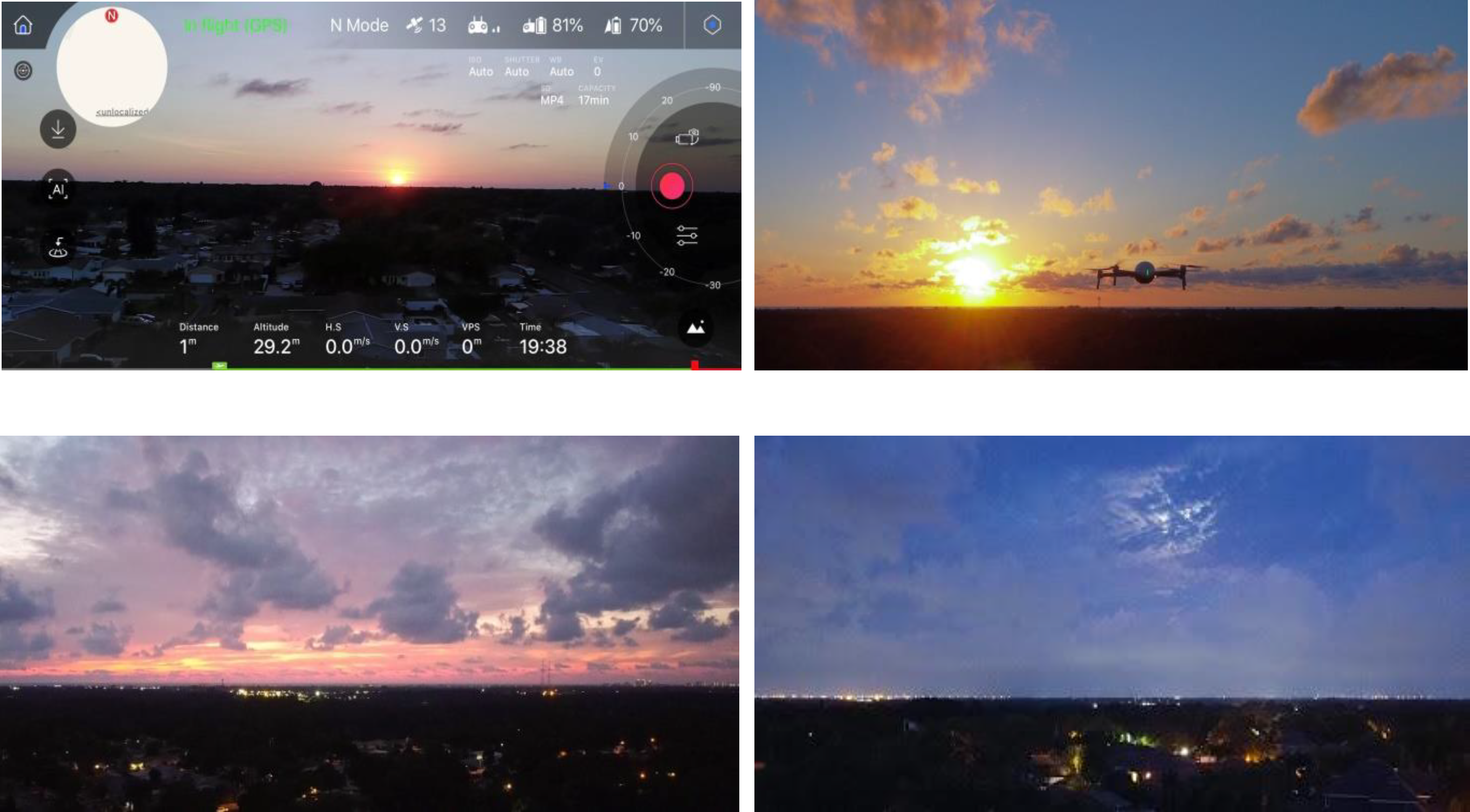 According to a study from University of Wisconsin on November 15, 2007 researchers found that: "The colors of the sunset result from a phenomenon called scattering. Molecules and small particles in the atmosphere change the direction of light rays, causing them to scatter. Scattering affects the color of light coming from the sky, but the details are determined by the wavelength of the light and the size of the particle. The short-wavelength blue and violet are scattered by molecules in the air much more than other colors of the spectrum. This is why blue and violet light reaches our eyes from all directions on a clear day".

Due to the inclination of the Earth and the sunlight transmitting much further through the atmosphere during sunrise and sunset, the far red photons transmit through the atmosphere and onto the Earth’s surface most efficiently. “More atmosphere means more molecules to scatter the violet and blue light away from your eyes. If the path is long enough, all of the blue and violet light scatters out of your line of sight. The other colors continue on their way to your eyes. This is why sunsets are often yellow, orange, and red".

Weather and Climate Basics explains that: “The air in our atmosphere is composed of molecules of different gases. The most common gases are nitrogen (78%), oxygen (about 21%), and argon (almost 1%). Other molecules are present in the atmosphere as well, but in very small quantities". 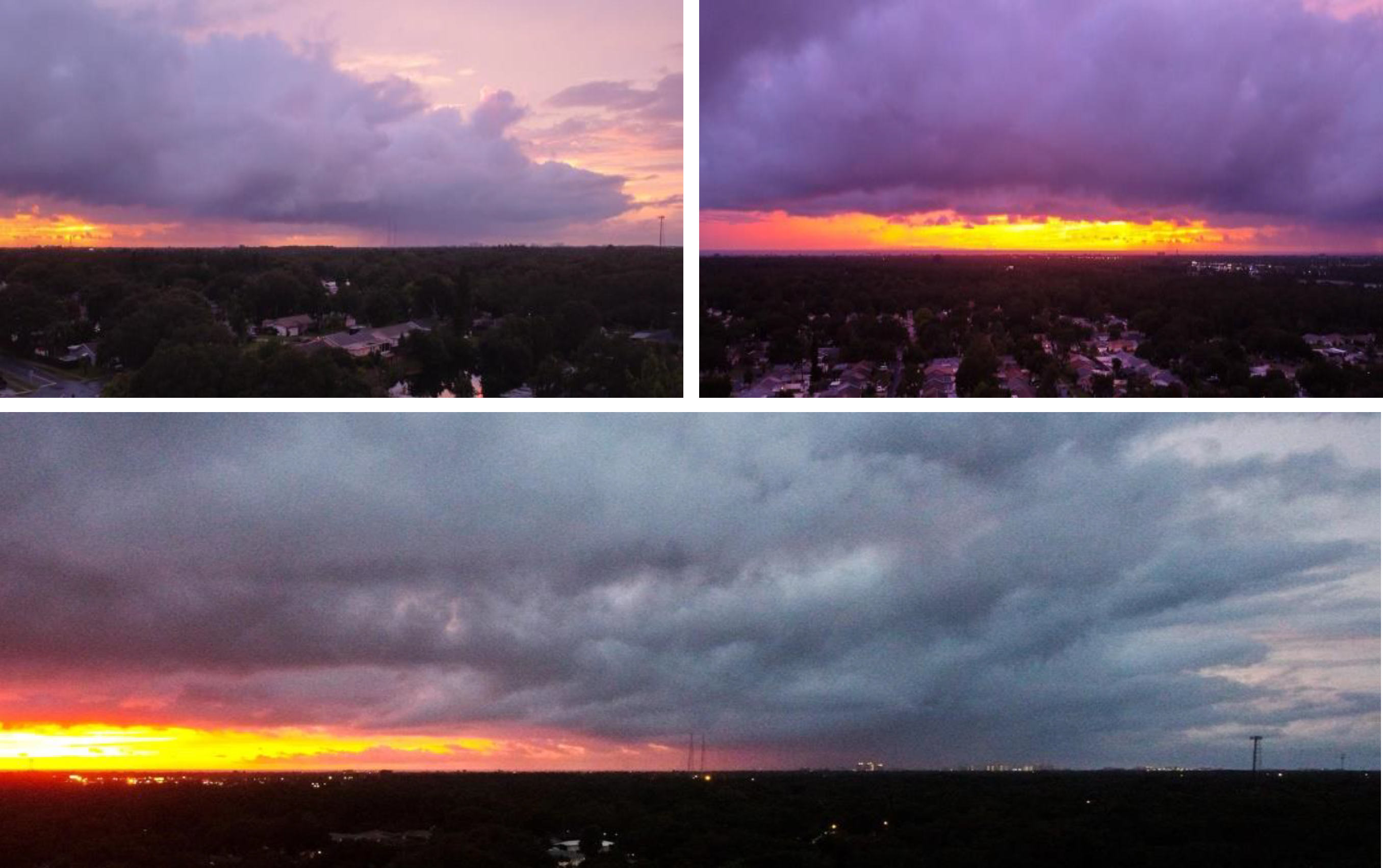 Far red illumination is an important wavelength to monitor when observing the sunset. We are using the Lighting Passport smart phone spectrometer from Allied Scientific Pro to take measurements of natural lighting in several environments. The far red (735nanometer) of the spectrum transmits through the atmosphere, where the other colors get absorbed and scattered by the oxygen and nitrogen molecules in the atmosphere first as it gets dark. After the sun sets below the horizon the remaining light is called the twilight, which may last for 15 minutes.

Here is a great twilight from Jaco zero meters in altitude where significant portions of the orange, red and far red photons transmit through the atmosphere and create a brilliant display of majestic color. This is a twilight shot from Costa Rica and Japan both at sea level. 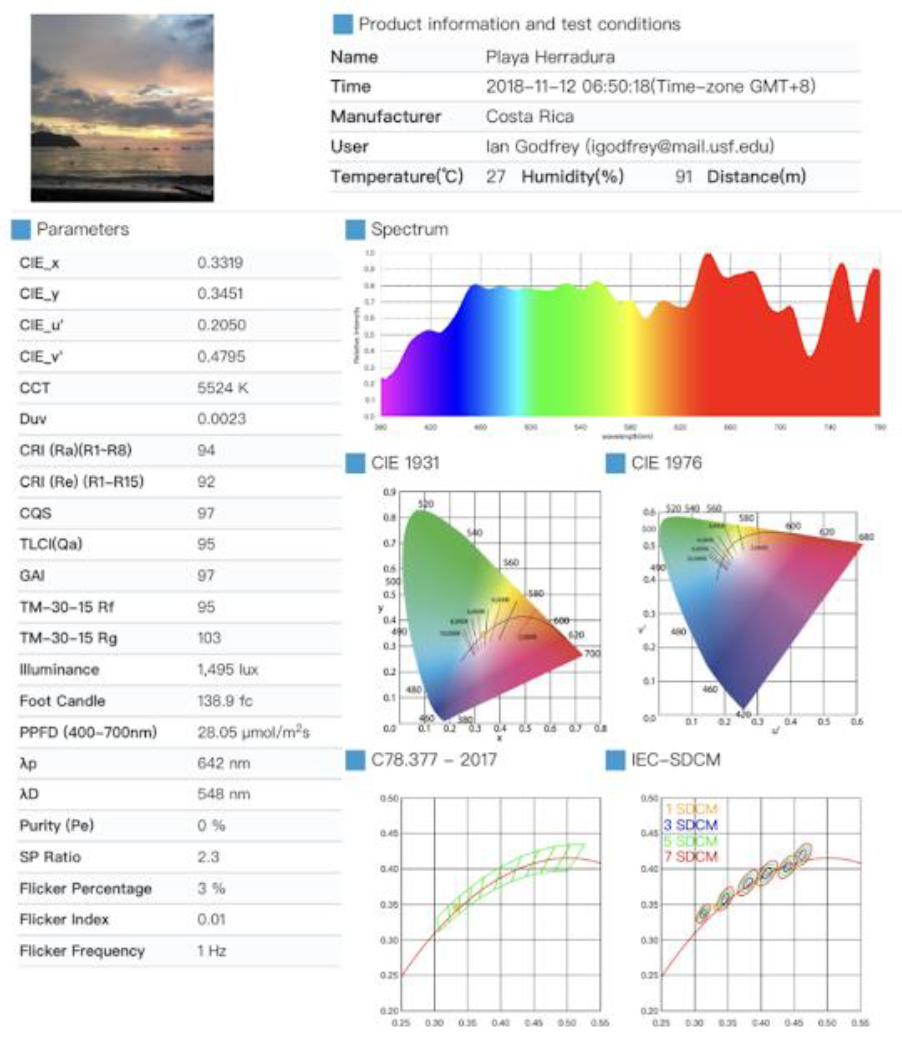 This was twilight at the summit of the Irazú Volcano 3,432 meters above sea level on January 16th, 2020 when I was studying there in January of 2020.

Figure 5: Twilight at the summit of the Irazú Volcano in Costa Rica 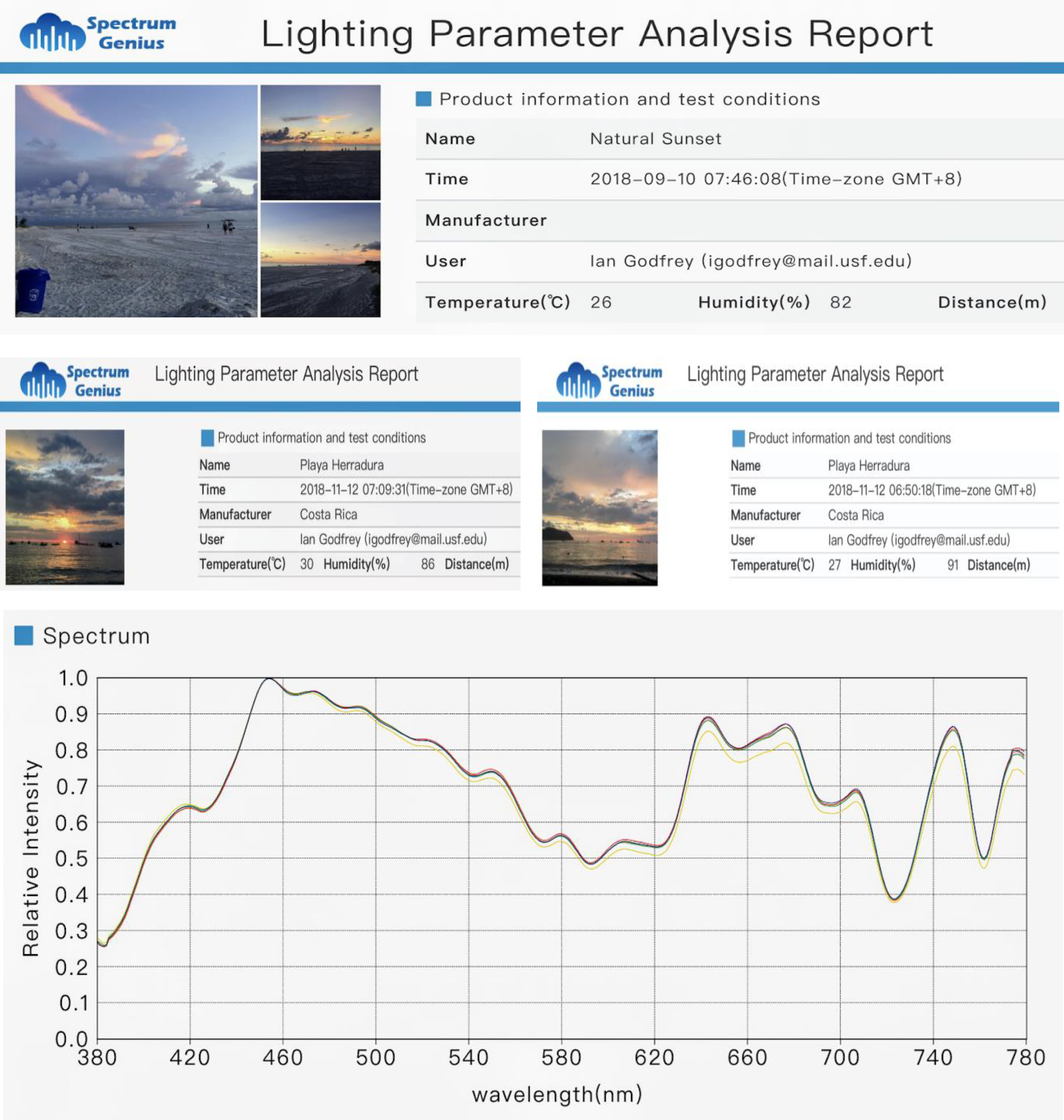 The image above came from the International Space Station or ISS and shows twilight from an altitude of 211 nautical miles. Cloud tops reflect reddened sunlight filtered through Earth’s troposphere, the lowest layer of our planet’s atmosphere.

These are the official 3 categories of twilight which are outlined in the image below. 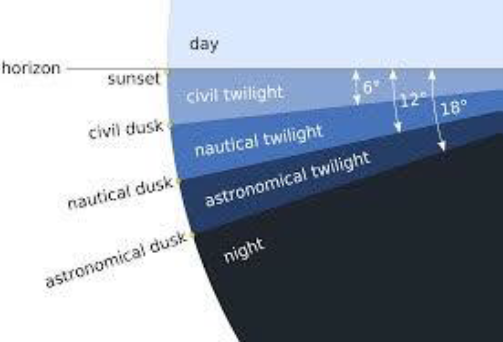 The Lighting Passport has sufficient sensitivity to take measurements at this time, which can be very beneficial as scientists continue to monitor the natural sunlight radiation during different parts of the day. Twilight is also a fun time to fly drones and photograph the atmosphere as well. Understanding light, shadow and composition will help improve your photography skills.

Figure 9: The OVATION Aurora Forecast Model shows the intensity and location of the aurora provided by the National Oceanic and Atmospheric Administration or NOAA Space Weather Prediction Center

According to the University of Alaska Fairbanks Geophysical Institute; In the arctic regions there is a strong presence of the Aurora Boreal. There is always some aurora at some place on earth. When the solar wind is calm, the aurora might only be occurring at very high latitudes and might be faint, but there is still some aurora. In order for us to see the aurora the sky must be dark and clear. Sky glow or light pollution can complicate observations of the aurora for those in highly populated regions. Sunlight and clouds are the biggest obstacles to aurora observations which are an important and often misunderstood aspect of Earth’s atmosphere. For example there is quite strong yet poorly understood tendency for aurora activity to be stronger at equinox than it is at solstice. This so-called “Russell-McPherron effect” means that the statistical likelihood of seeing aurora over interior Alaska is roughly twice as high at equinox as it is at solstice. Combined with a slight preference for better weather in spring than in fall, this means that late February to early April are usually considered the best aurora viewing months in Alaska.

With recent advancements in unmanned aircraft systems or UAS technology companies like Powervision are now creating drones capable of flying in harsh conditions such as wind and snow. For example the Power Egg X can withstand up to 20 knots or 23 mph of wind speed making it a unique device which can be used to monitor and document these atmospheric phenomena. The Power Egg X is a drone that can assist with atmospheric and airspace research.

When there are average activity levels, auroral displays will be overhead at high northern or southern latitudes such as Iceland or Antartica. Professors and scientists working with the University of Alaska Fairbanks Geophysical Institute suggested; “Places like Fairbanks, Alaska; Dawson City, Yukon; Yellowknife, NWT; Gillam, Manitoba; the southern tip of Greenland; Reykjavik, Iceland; Tromsø, Norway; and the northern coast of Siberia all offer a good chance to view the aurora overhead.”
“When there is a solar maximum the Aurora covers significantly greater geographical area. The last solar maximum was in 2014; the next is expected around 2025. The chances of seeing the aurora at lower latitudes increase when the sunspot cycle is at a maximum, but chances at higher latitudes are not as dependent on the solar maximum because the auroral oval is normally present.” 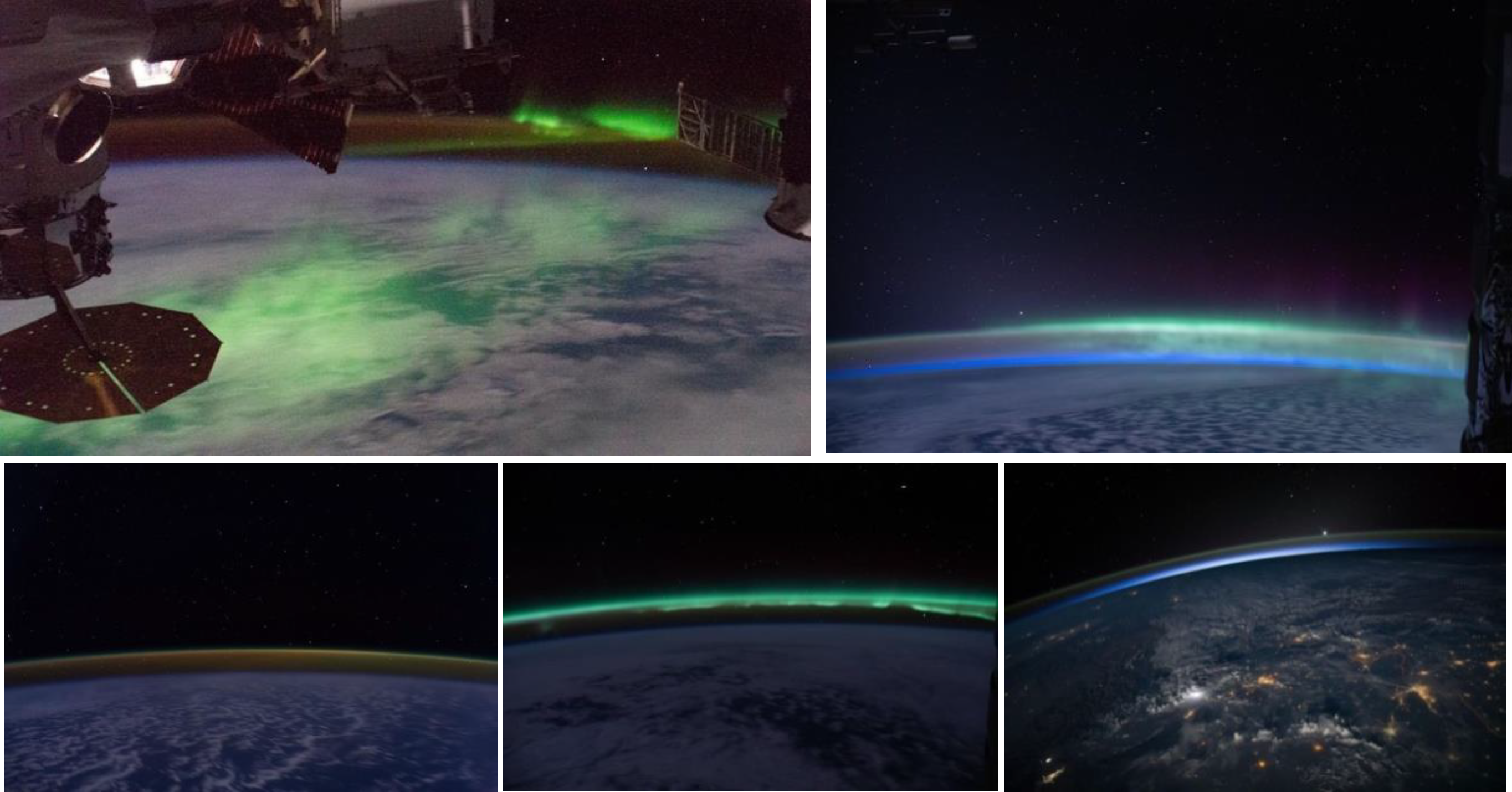 Figure 11: Earth glow and aurora photographs taken from the International Space Station on April 10th and 13th as it orbited the Indian Ocean south west of Australia.

“The aurora is a luminous glow seen around the magnetic poles of the northern and southern hemispheres. The light is caused by collisions between electrically charged particles streaming out from the sun in the solar wind that enter Earth’s atmosphere and collide with molecules and atoms of gas, primarily oxygen and nitrogen.” The Earth’s magnetic field redirects much of the radiation to the poles where the photons then collide with the atmospheric molecules.

Light pollution; also referred to as the sky glow will not initially seem to be a urgent problem of today’s society, although it can be used to showcase how far humanity has distanced itself from nature. Light pollution can impact the health of an ecosystem!

Sky glow does have an effect on humans, animals and plants. Nocturnal wildlife such as owl populations is most significantly affected by light pollution. Sky glow can also be used to illustrate the amount of energy we are consuming. For example much of the USA is still using High Pressure Sodium lamps for street lighting even though much more energy efficient LED replacements have been developed.

The specialized industries of astronomy and astrophotography are some of the most disturbed over the complication of light pollution. Professional astronomical investigations are frequently complicated by the increasing light pollution.

Figure 12: Images of the Sun’s Corona the outermost layer

“Streams of charged particles that produce the aurora come from the corona, the outermost layer of the sun's atmosphere. The corona is exceedingly hot, measuring more than one million degrees. The high temperature causes hydrogen atoms to split into protons and electrons. The resulting gas of charged particles is called plasma, which is electrically conductive. The solar plasma is so hot that it breaks free of the sun's gravitational force and blows away from the surface in all directions. The movement of this plasma is called solar wind. The intensity of the solar wind and the magnetic field carried by it change constantly. When the solar wind blows stronger, we see more active and brighter aurora on Earth.”

1. How can the modern DEM technology used with UAV’s assist scientists and volcanologists researching active volcanoes?

2. Explain what DEM is and how it is being used today? What advancements might you wish to see in the future?

3. How can these new advancements help conservation efforts?

4. Can UAV technology assist with the task of public safety with in the park?

in Welcome to our blogs !
# Lighting Passport Blogs Spectrometer Blogs
Use of NIRS to detect counterfeit drugs