Laser hardening is a new field that is fast growing and has several advantages over conventional hardening methods. These advantages include better wear resistance, the extension of component life, enhanced strength, and fatigue limits. The traditional hardening methods use a bulk transformation process where the entire piece is heat treated. There may also be subsequent heat treatments for surface hardening. However, in laser hardening, there is a large temperature gradient between the surface and the bulk, making it possible to eliminate the need for an external quenching medium. Laser hardening is a 3 step process as described below:

1. the material is heated

3. The part is quickly cooled; this is referred to as quenching. The temperature used in the second step is called Austenitizing temperature. At this temperature, iron transforms from its ferrite form (α-iron) to its austenite form (γ–iron). Austenite has a Face-Centered Cubic (FCC) crystal structure, whereas ferrite has a Body-Centered Cubic (BCC) Structure. FCC structures have larger gaps between atoms than BCC structures; the larger openings allow FCC structures to dissolve more carbon atoms into the material. When the material is quickly cooled after the austenitizing temperature period, the crystal structure turns from FCC to BCC, and the solubility of carbon decreases significantly, which causes the carbon to precipitate. Thus, we will obtain the supersaturated solid solution (consisting of carbon and iron), also known as Martensite (BCC crystal structure same as ferrite but higher carbon content). Because of the high carbon concentration, martensite has higher mechanical strength (hardness) and wear resistance than both Austenite and ferrite.Figure 1 shows the hardening process:

It is required to explain the difference between hardened and tempered zones. The difference between tempering and hardening can be explained as follows. Tempering is a heat treatment that increases the toughness of a part by decreasing the hardness of the material, making it more ductile and less prone to chipping and fractures.

In one study² several different pulsed lasers of varying pulse durations plus a continuous beam laser were used. The figure shows the hardened and tempered zones.

Hardness is expressed as Vickers (HV), which is defined as 1.854 (F/D²), where F is the applied force in Kg and D² is the area of indentation measured in square millimeters. These units are based on the resistance of the part to the penetration of a counter body. Other units such as Rokckwell (HRC) and Brinell (HV) are also used³.

The following observations can be made about the use of lasers with varying pulse    widths⁴:

The laser process is a single-step process that only involves the interaction of the laser source with the surface. No external quenching medium is required. This is advantageous for industries to be able to enhance the mechanical properties and performance of a component⁴.  A buffer gas can be used to enhance the hardening process. Figure 3 shows the scenario. 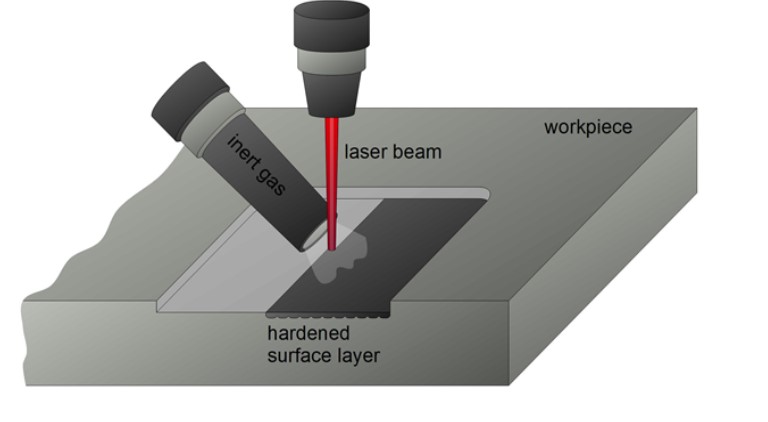 Figure 3: Use of a buffer gas5

Nitrogen is usually used as an assist gas to stop the burning process and allow the laser beam to harden the material properly. As a result of hardening, the microstructure of martensite shows significant improvements in wear resistance.

Allied Scientific Pro offers laser cleaning systems that are based on nanosecond pulsed lasers but are also moving towards acquiring laser hardening technology. A 4 kW CW pulsed laser has been ordered for testing, and soon hardening tests will be performed on steel substrates.

For more information on laser cleaning systems offered by ASP, refer to the following link.