Laser ablation is a process through which a pulsed laser deposits a certain amount of energy on a surface and it removes the material by evaporation or sublimation. CW lasers can also be used in laser ablation but pulsed lasers are more common. This process can be used to remove a layer of paint from a surface or contamination from surfaces of statues and historical monuments. Hence, laser cleaning refers to removing contaminants from surfaces by the use of laser ablation. Figure 1 below shows the laser ablation process through which the materials from the surface are vaporized. 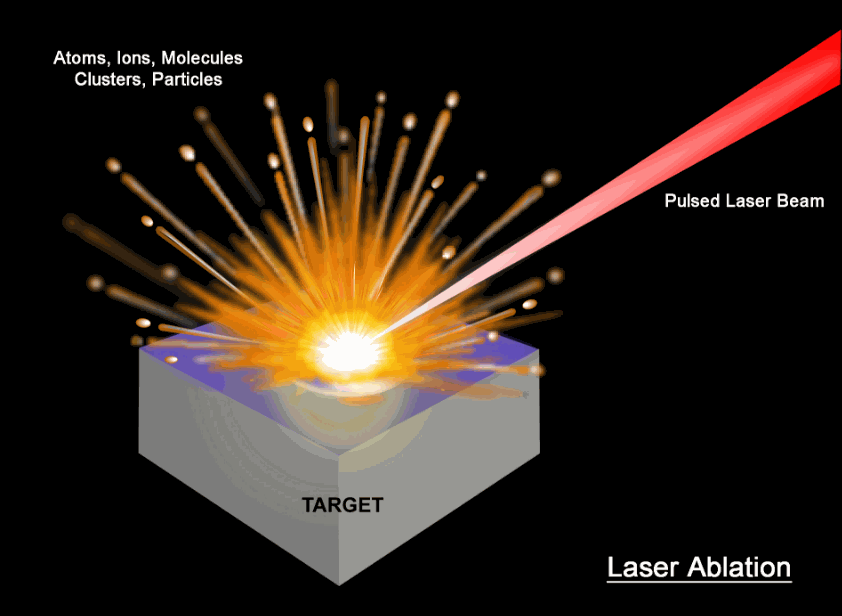 There are many types of pulsed lasers that are used in laser ablation. A laser medium which could be a gas, a crystal or a fiber is always placed in a resonant cavity which normally includes one fully reflective and one partially reflective mirror. The reflective surfaces could be made of diffraction grating as well as is the case with fiber lasers. The medium is pumped electrically or optically to achieve an excited state and spontaneous emission from atoms cause similar photons with the same properties to be emitted and emerge out of the partially reflecting mirror. Depending on the optical losses of the medium, it may require active cooling. Using Q-switching which is a technique to produce pulsed output power, one can obtain a pulsed beam and deposit a huge amount of energy in a short time on a surface. Q-switched pulsed lasers are often used in laser ablation and since there are many different types, they need to be classified. The four categories of lasers used in laser cleaning are gaseous lasers such as Excimer (UV) and CO2 (on the border of far IR) lasers, solid state lasers such as Nd:YAG (near IR) and Ti:Sapphire lasers (near IR) and fiber lasers doped with Ytterbium, Erbium or Thulium (lanthanides). Table 1 below lists the important parameters of these three categories of lasers for laser cleaning.

Normally, NIR pulsed lasers such as Ti:Sapphire lasers have low average power and are used for micromachining since they do not impart much heat energy to the surrounding areas and therefore can make a clean hole or cut. The nanosecond lasers in the UV range (excimer) can utilize their short wavelength for techniques such as microlithography (making patterns on a thin film) which require high resolution and also dissociate molecules photochemically which is particularly useful while dealing with radioactive oxides in nuclear power plants. Nanosecond lasers in the NIR range such as Nd:YAG lasers and fiber lasers are suitable for cleaning historical monuments and also removing oxide and oil layers. Compatibility of available fiber optics which have a good transmission in the NIR region is a big asset for these lasers. They can also be used for paint removal but due to high metal absorption at NIR, one has to be careful not to damage the substrate. CO2 lasers which have a wider pulse width and high average powers plus a long wavelength at the mid-IR region, have been used in the industry for many years for cutting and drilling. The low absorption for metals and high absorption for polymers at CO2 laser wavelengths is a big advantage for these lasers but the higher cost and unavailability of fiber optics that transmit well in this region are among the disadvantages.

How to choose a laser for a particular material?

Table 1 showed us the different varieties of pulsed lasers that can be used for laser cleaning. These lasers range from UV to mid-IR wavelengths and from femto-second (Ti:Sapphire) to 100 nsec pulse width (CO2 laser). Some of these lasers have very high average power and some have huge peak power (peak power is defined as pulse energy divided by the pulse duration). The question arises as to what laser to choose for ablating a particular material, a paint layer or a coating? The answer lies in the material properties of the object and the few that can be named are optical attenuation coefficient α, Thermal diffusivity DT, density ρ and heat of vaporization Hv (which is defined as the quantity of heat required to convert the unit mass of a substance into vapour). The laser parameters that one can play with are the type of laser, pulse width τL, the Fluence (F) which is defined as the amount of energy deposited per unit area and the beam size rb. Let us examine these material properties and laser parameters in further detail. When a beam of laser radiation falls on a surface, it penetrates the surface by a depth Lα which is determined by the optical attenuation coefficient α so Lα=1α. The thermal penetration depth LT on the other hand, may be the same size or deeper depending on the duration of the pulse.   Figure 2 shows both the optical and thermal penetration depths. 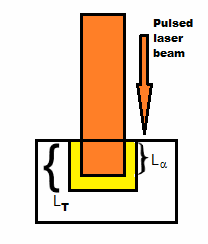 LT  depends on thermal diffusivity DT which in turn depends on specific heat cp and the density of the material ρ, where DT=kρcp (k is the thermal conductivity of the material ). For very short pulses, such as femto-second pulses the thermal and optical penetration depths are equal but for longer pulses in the pico-secondor  nano-second regime, the thermal penetration depth becomes larger and grows with increasing pulse duration. This is represented by the equation LT=DTτL , where τL is the pulse width. To achieve ablation, enough energy needs to be deposited per unit area to vaporize the material. This energy is known as the threshold fluence, Fth.

In case of pico-second and nano-second pulses, this is not the case anymore since the thermal penetration depth LT grows with the pulse duration and is larger than the optical penetration depth. Therefore, the threshold fluence Fth for pulses greater than 10 ps has to be calculated from a different equation which is Fth=ρHvLτ  and hence it grows with density, heat of vaporization and pulse length.

One can model the interaction of radiation with matter and understand the behavior of the ablation process based on the equations for the model. However, that is beyond the scope of this article and it suffices to present the results for each regime of pulse duration. For pico-second pulses, there is a direct transition from solid to vapour and the ablated features are clear cut and sharp. For pico-second pulses there is some liquid phase physics that comes into picture and some material get redeposited after ablation on the surface. Finally for nano-second pulses, there are a lot of melting  and some vaporizations. This causes ablated features which are not very sharp and hence material deposition at the rim of ablated features are often observed. Figure 3 below shows the difference between a hole made by a fsec and a nsec laser.

In order to answer the initial question as to what laser to choose for which material or application, three pulsed lasers of different types which are: A Ti:Sapphire laser (110 fsec pulses, 1kHz rep rate, 0.5 watt average power), a Nd:YAG laser(10 nsec pulses, 50kHz rep rate, 100 Watts average power) and a CO2 laser (250 nsec pulses, 150 kHz rep rate, 200 Watts average power) are compared (Excimer lasers were left out because they are the most expensive). These are some typical specs for these lasers. The Ti:Sapphire laser is probably best suited for micro-machining applications and  not ideal for paint removal from an aircraft. The reason is that although it has high peak power, the average power is low and it can not remove hard paint quickly. It is also expensive since it requires an argon laser to pump it. The choice between a nir laser (Nd:YAG or fiber laser) and a mid-IR laser (CO2 laser) comes down to wavelength dependence of absorption coefficient of different material. Figure 4 shows the dependence of absorption coefficient on wavelength. 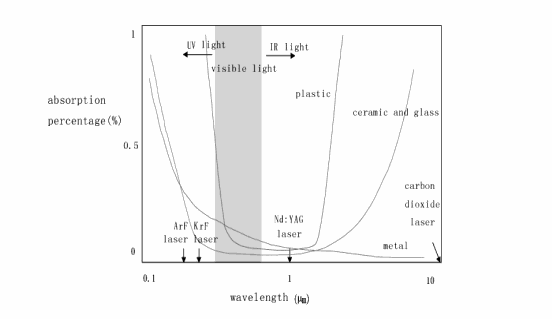 Plastics, ceramics and glass (organic material and polymer coatings such as paint should be included as well) have high absorption coefficient for mid-IR wavelength which includes the 10.6 μm wavelength of CO2laser. However, their absorption coefficient is small for metals. Therefore to remove a paint layer from an aircraft which is on top of a metal body of an aircraft, CO2 laser is a good choice since it removes the paint and it is mostly reflected by metal so it won’t damage it. However, the unavailability of inexpensive fiber optics at mid-IR region, the ability of tuning the threshold energy for nanosecond pulse lasers in the NIR region and the lower cost of the laser makes Nd:YAG and fiber lasers equally desirable for paint removal in different applications such as aircraft paint removal.

To compare laser cleaning with other cleaning methods, one can examine sandblasting, dry ice blasting, water jetting, abrasive and chemical methods of laser cleaning. All the above mentioned methods could damage the surface, create a lot of pollution in the environment, are noisy and can not be automated. Laser cleaning on the other hand is normally  accompanied by a suction tube which removes the ablated material. So, laser cleaning is better for the environment, is faster, does not damage the surface if the right parameters are chosen, is more versatile due to range of selectivity for laser parameters and can be automated.

Allied Scientific Pro has introduced the Laser Art-100 Cleaning System which uses the near infrared beam and provides an up to 5 meter fiber optic delivery for remote access. It is a very efficient laser cleaning system pulsed up to 55 kHz with an average power of up to 100 Watts and a pulse duration of 10 nsec. Figure 5 below shows this system. 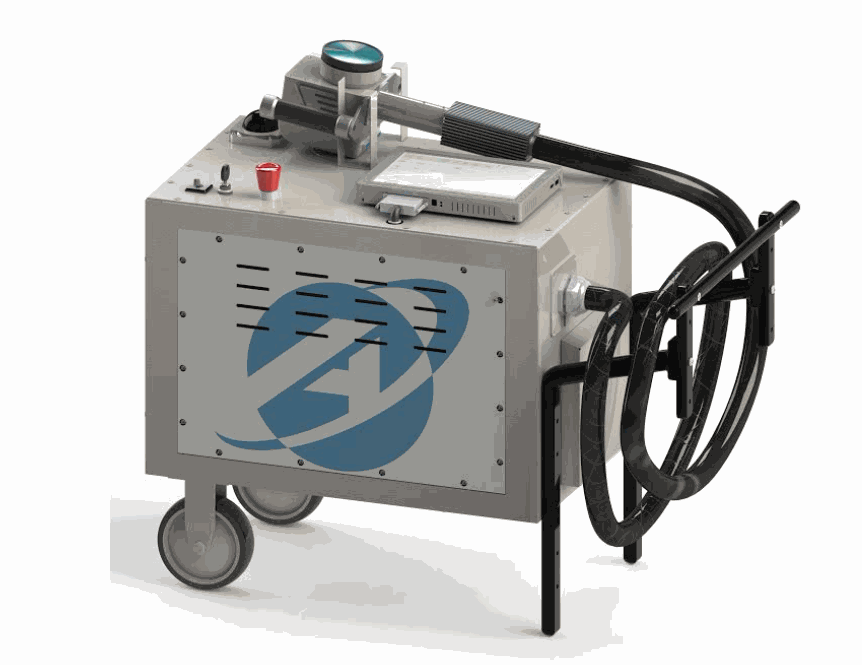 A galvo system coupled to optics attached to it would allow for different kinds of beam shapes which could be adjusted to the optimum shape required for each application. The near IR beam is normally a few centimeters long and is linear.

in Welcome to our blogs !
# Lasers Cleaning Blogs
How do You Measure Light?