Cathode Relithiation; Use of laser cleaning for removal of Solid Electrolyte Interface (SEL) from Li-Ion batteries

Electric Vehicle (EV) is an important mode of transportation which is green and friendly to the environment. EV relies on Li:Ion batteries and although the lifetime of an Electric Vehicle Battery (EVB) is quite long, eventually there comes a time, when the battery’s performance is reduced and needs to be discarded. What happens with the aging of a battery, is a layer of Solid Electrolyte Interface (SEI) gets deposited on the electrode (Reference 1). This impedes the movement of Lithium ions on the surface of the Cathode and as a result the performance of the battery is deteriorated. According to United States Advanced Battery Consortium (USABC), an EVB needs to be discarded when its performance reaches 80% of its rated capacity. This is termed the End of Life (EOL) for the battery.

There are several options when an EVB reaches its EOL. These options include recycling, incineration, land-fills and reuse. Recycling will involve the use of chemicals which will impact the cathode material and reduce the performance of the recycled battery. Incineration will release certain toxic gases and heavy metals into the environment. Land-fills are also vulnerable to toxicity of batteries and there is the potential of mixing heavy metals in water supplies.

A useful idea to deal with LIB at EOL is to remove the deposited SEI so that the battery can be re-used. This can be done using solvents but they could alter the electrode’s chemistry and deteriorate the performance. Another way to remove the SEL is to use the laser cleaning method which is a non-contact method, does not use a secondary medium, and does not pollute the environment since the ablated debris get collected using a vacuum pump. This is a very cost effective method and does not damage the electrodes if the laser operating parameters are properly chosen. In one study a second harmonic Nd:YAG laser at 532 nm was used to clean and activate the surface of the electrode made of platinum and glassy carbon electrodes (Reference 2). In another study, In another study a near IR Er:YAG laser was used to remove varnish from paintings (Reference 3).

In the study which is the focus of this summary note, a Nd:YAG laser at 1064 nm was used to clean the SEL from Li:Ion battery in the pouch cell shape (Reference 1) . The Lithium ion rechargeable cells were made of LiFePO4 cathode and carbon anodes with Dimethyl carbonate as the electrolyte. The parameters of the laser were carefully chosen such that there would be enough fluence to remove the SEI layer. A 20 Hz pulse repetition rate , 0.5 msec pulse width and 0.4-0.28 pulse energy were used as the laser parameters. The fluence of the laser (energy/unit area) made an important difference in the cleaning performance and this was adjusted either by varying the pulse energy or by varying the distance from cathode surface. Laser pulse energies from 0.4 to 4 joules were used at distances ranging from 14 to 34 cm. This resulted in fluences ranging from 0.035 J/mm2 to 0.169 J/mm2. After the removal of SEI layer as shown in figure 1, a scanning Electron Microscope (SEM) and a FTIR were used to assess the quality and the transmission of the electrode surface. Figure 1 shows the schematic of removing the SEI.

Figure 1: Removal of SEI using pulsed laser and examination using SEM
SCM picture of before and after cleaning is shown in figure 2. It can be seen that the surface roughness for the laser cleaned surface has been reduced substantially indicating the removal of SEL 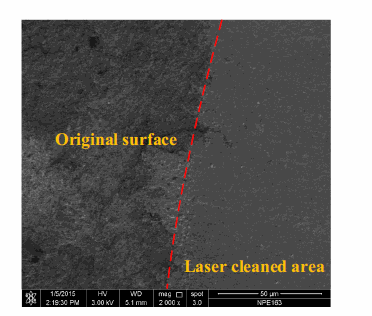 The results of SEM show that at a low fluence (0.035 J/mm2)the SEL is not completely removed and at a very high fluence (0.169 J/mm2) some melting occurs and the cathode is damaged. The best fluence to remove all the SEL and not melt the cathode happened at 0.142 J/mm2 ( 4 joules, 34 cm distance). FTIR measurements also showed that the transmission of the cathode increased with laser cleaning of the surface and the removal of SEL.

In summary it was demonstrated that the laser cleaning of SEL from the cathode surface for LIB at EOL is safe, cost effective, environmentally friendly and damage free method.

Allied Scientific Pro offers Laser blast-100 system which is suitable for laser cleaning of the EVB cathodes. More information can be found in the following link: https://lasercleaning.alliedscientificpro.com/laserblast/